Through this post, I just want to tell my friends and families that I’m fine now. When the bomb exploded, I was 6 km away from the area. It was so scary. I didn’t see directly, but people were panicking, as it’s nearby and I was all alone. Many different information spread out on social media, I didn’t know where to go, where is safe. People were going to opposite direction from Sarinah, Thamrin (bombed area). My friends told me to stay where I was, but I didn’t feel safe, as I saw polices, black cars from national security agency, they were securing one of the big malls in Jakarta (Senayan City). But I was still afraid alone. 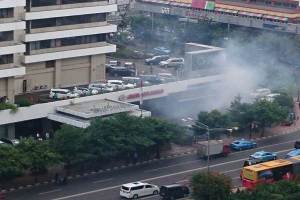 Couples months ago, I talked to some friends about terrorism, I also saw a video from Youtube about the underground communication between many parties (including government from particular countries) discussing about terrorism. It’s very complicated and I still don’t understand what’s real, what’s happening, and most importantly, I don’t know if a word ‘safe’ still exists. New York, Paris, Istanbul, Jakarta, and many other countries, and where is next?

I don’t know what their plans are, I don’t know where they will attack people, what they will do, who they are. But one thing I know is that I believe in peace and love. I call it as my religion. I believe in sharing kindness, sharing love. It is a way to spread peace, a way to spread positive ambiance, a way to affect other people to do the same. If people share anxiety, let us share peace. Would you do the same together with me? 🙂 #ibelieveinpeace